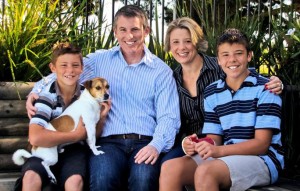 When the news media present a new premier to the public, how do they discuss the politician’s family life? Does the type of family a politician has matter when the media explain their capabilities as leaders?This research answers these questions by looking at how journalists use family life to assess the political legitimacy and capabilities of women and men leaders in Canada and Australia.

Why are families important when we think about political leadership?

Women in politics often face a parenting dilemma. If they have children, the media question their capacities to balance their roles as caregivers and politicians. If they do not have children, the media critique them for being selfish and ‘unfeminine.’In contrast, men are not questioned about their abilities to balance their roles as parents and politicians.Yet, male leaders themselves often use a ‘family strategy,’ parading their wives and children to demonstrate their sound character.Our research shows the problem goes beyond the parenting dilemma. The news media affirm the nuclear family, or the ‘idealized western family model,’ as the most appropriate type of family for political leaders

What is the idealized western family model?

The idealized western family features a heterosexual couple in a monogamous relationship with traditional masculine and feminine roles and expectations. This family type also includes the children of the heterosexual couple. Collectively this family lives within a single, as opposed to a multigenerational household. This type of family is considered ‘idealized’ because of how it is legitimized and privileged in governmental, legal and cultural institutions.By focusing on this idealized family type, the media ignore and delegitimize the existence of numerous other family forms,including but not limited to:

For men, having families that conform to the idealized model can be beneficial. If a man occupies this family form, the media are likely to treat his familial duties as a testament to his good character and political legitimacy.He’s described as a good dad and a family man. Also, the media regard men’s families as invaluable political resources providing them with the support they need to succeed in political leadership.

How do the media treat women politicians with families? The answer to this question is highly complex and depends on the type of family she has. Journalists describe women leaders as being more effective when they have families that are ‘idealized’ and, by extension, considered normal in western culture.

The media see the ideal female politician as one who is in a heterosexual relationship with older children. We can see this with the examples of Canadian premiers, Kathy Dunderdale, Pauline Marois and Rachel Notley. In the case of these premiers,news coverage simply mentioned their children and grandchildren. However, the media made no attempts to highlight their domestic duties as mother

The study finds that there are challenges for women whose families fall outside of the idealized western family type. These women were more likely to face media scrutiny about their roles as parents. For example, we see different coverage of women who were single mothers, divorced, caring for younger children, or in a same-sex relationship at the time of becoming premier.Unlike men, the media pay close attention to women politicians with young children. Our study finds that journalists highlight women’s roles as caregivers. The media also associate women’s capacity to be good mothers as evidence for their abilities to be good politicians. For example, when discussing former BC premier Christy Clark, the media noted, “she’s a single hockey mom [which] means she’s already capable of doing the work of two adults” (Fralic 2011)

Finally, the study shows a level of media discomfort towards women leaders without children.Journalists suggested that the public would be less likely to be able to identify with the lives of the three childless female leaders studied because they did not have children. Women without children are therefore placed in situations by the media where they must explain their childlessness. Once women leaders highlight their desires to have children, the media treat their choice not to have children as a personal sacrifice, suggesting they are pursuing political leadership at the expense of attaining personal fulfillment through motherhood

This study shows that the type of family a politician has matters when it comes to how the media evaluates them. In light of a growing diversity of family forms, the media should be more attentive to how they evaluate politician’s family lives.Journalists should examine the assumptions they make about the connections between politicians’ personal, family lives and their ability to be good leaders

Tanya Nayler: Job-sharing is one big way Canada could lead in modernizing political life, which is nearly impossible to balance with parenting young children https://policyoptions.irpp.org/magazines/july-2019/for-more-mothers-to-run-the-political-workplace-has-to-evolve

Melanee Thomas and Amanda Bittner: Mothers and Others: The Role of Parenthood in Politics https://www.ubcpress.ca/mothers-and-others